The Internet and "Outrage Culture"

I have no idea where this term came from, but I like it. And I also hate it.

Is "social media" too broad a term? Maybe, but go with it until I come back and edit in a better one. A lot of people are so quick to lose themselves over whatever happens to be trending, that they end up looking foolish in the process. My first thought is that they want to seem "in the know" about the issues, so they skim some headlines and parrot them to impress their friends.

The issue, or at least one of the issues, that comes up with this is one that plagues many Facebookers: these people seemingly don't read the stories that have them so upset (I hope none of them are in the journalism field). They take a headline, or just part of it, and go off about how the issue is "unconstitutional" or "immoral." Oftentimes they have half the story and completely miss, or willfully ignore, the other half. And forget about trying to explain it. They are more stubborn than I am about not getting a cat.

It can make for some entertaining reading at lunchtime, but mostly it makes me wonder if there should be some kind of test before some people should be allowed to post online.

Let me give a recent example of what I mean - I was going to go with three, but I dealt with backlash on Planned Parenthood stuff already so I won't address that again. And the Kim Davis story will lead me into a diatribe on crazy religious people, and I don't want this blog to be that deep.

That example is this "TROPHY" shirt that Target debuted a few months ago: 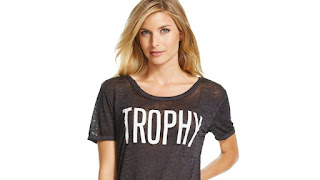 Some took this image and blasted Target for being sexist, because there was no similar shirt for men on shelves (my guess: "PROVIDER"). Others took it as the store sending the wrong message to women, that being an "object" or a "prize to be won" is not how they should be viewed. No matter which side they took, people were adamant that the shirt should not be sold. A woman even started a petition to have the shirt removed, saying it "perpetuates rape culture." I wish I was kidding about that. I also wish I hadn't read most of those Facebook comments, but I suppose I'll never learn.

These people clearly have no sense of humor, or were not smart enough to "get" the shirt.

I can say that with some confidence, as everyone I spoke to about the shirt - men and women - found it funny. And Target came out and said the shirt was meant to be funny, so there's that. Also my wife, who is a female person, wants to have this shirt. That is why she wins. (Of course, my local Target doesn't have the shirt in stock.)

In this case, people didn't take part of a headline to jump on their soapboxes. They merely formed super serious, even obscene, opinions about a t-shirt that doesn't even have a dirty word on it. Only in America, my friends!

If you find yourself in the situation many others do, where you are upset about information on the internet, take a lesson from our pal, Tim: 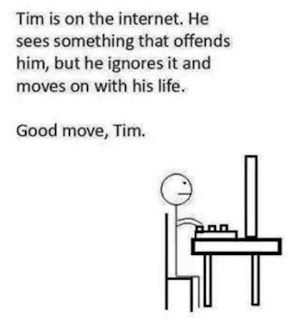 I know, a meme. Really, Pat? Yes, really. It is an easy and effective way to wrap up before I go off on another tangent. Plus, who doesn't love pictures? Wait, maybe I shouldn't have asked...

Thanks for coming to the table, my friend! Come back next time for more of the same, or something completely different!