That Time I Had a Great Year

Hey there, Pat here! I hope your Sunday is going well, and that you don't have to work tomorrow so you can enjoy whatever festivities you want tonight.

I just completed my annual run through Ganon's Castle, and now I'm sitting here in my sweatpants (naturally) trying to find the best way to ramble about myself without straight up bragging. I tried to make this a part of the podcast yesterday, but I think this way is better. You can just keep scrolling if you'd like!

I hate "putting myself over" as rasslers say - that's "saying good things about myself" for normal people - but I feel like I've earned a bit of it this year. All things considered, my 2017 was quite awesome. I don't usually make resolutions for a new year, I just have stuff I'd like to do. And this year I was able to cross a lot of cool stuff off my list. 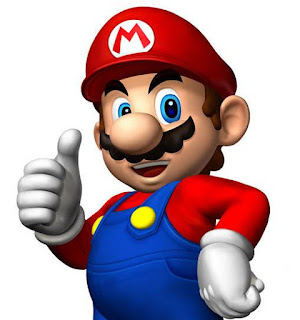 Lose weight:
This one is on many resolution lists, and it was definitely near the top of mine. I hated how I looked and felt, so I decided to change my diet and get back to my yoga routine. A shoulder issue has curbed the latter, but forcing myself to eat oatmeal every day has helped me lose 26 pounds since October, 2016. I've a long way to reach my goal, but I feel so much better already. The hardest part was the first two weeks I dropped soda, but now I'm in it to win it!

Save money:
Another "I swear I'll do it this year" item. I didn't save as much as I wanted (Grubhub is too damn enticing), but I have been able to put a bit away while chopping down my credit card debt. A few years ago, I saved enough in three months to buy this PC - I know I can do better!

Finish my N64 blog project:
After many years and even more re-writes, I finally tallied my list of top N64 games! I had so much fun with it, and got a bunch of great feedback, so it was a win all the way around. You can see the full list on its own page here!

Make new music:
My initial goal for the year was to record at least some instrumentals for my EP - I am realistic about myself somewhat. To date, I have one recorded. BUT, I did add a new song to the mix in February that only took me two days to complete. If you know how I write songs (hint: slowly), that's a huge deal. And at the very least, I have finalized the track list for the project, so that's a step in the right direction!

In March, we went to an open mic night at the Borough Pub in my old stomping grounds. I had never been to an open mic for comedy, so I didn't know how the room would be. I also didn't prepare a set for that night and there was no way I was going up to wing it. As soon as the night was over, I started writing. I knew there would be another one soon and I wanted to be ready to go. So a month later, I finally did the thing. I hated my closer, but I remembered all of my jokes and no one booed, so I call it a win! And, four days later, I wrote a new set. So I guess I have to prepare to do the thing again! (Thanks to Mrs. Bump for the photo!)

Diversify the podcast:
First, shoutout to me for dropping diversify right there. And second, I'm really glad I finally did this. For years, my show was sweet tunes, retail stories, and lots of sports talk. I understand that not everyone likes sports as much as I do, but I like to say words about athletics and stuff. But now I have finally listened to those people who say, "hey man you talk sports too much" by adding more stuff to the show! Talking about what movies I want to see [and I totally will, I swear], games I might play someday, and yelling about current events - well, all of that stuff has helped me create a more well-rounded show. I finally may have a thing for everyone (though I'm always open to suggestions)!

Speaking of the podcast, another big step I took this year? Interviewing musicians. More importantly, interviewing musicians I hadn't met yet. Sure I didn't know Ron from Kim Jong Ill, but I work with Alvaro so I had a buffer there. And once I got over the hump, I just decided to go for it all. Both of them were absolutely terrifying, but I had so much fun. Thanks so much to Danny from Lost in a Name and Timmy from 7 Minutes in Heaven for being awesome as I trembled with fear!

Interview Charlie Saxton:
This, my friends, may be my career highlight in podcasting. 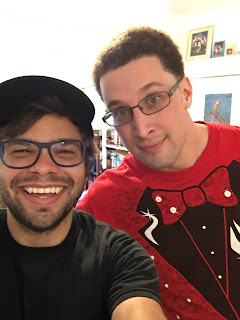 I've talked and written at length about this, so I'll be brief here. After eight (8, Bob!) years of going back and forth, we finally made it happen. And I have to say, it was just as fun and horrifying as I thought it would be. Having interviewed only one other time by myself, I wasn't sure how it would sound. But it remains one of my favorite moments from the show. My only regret is that we didn't break into a California singalong...I guess we need a part two!

I have done some other fun stuff this year: I finally saw the Globetrotters, went to my first Sixers game, took another trip to Cooperstown, and we had a blast on our full weekend at Wizard World (and more fun talking about it), but my words have bugged your eyes enough. Even though the president is a dope, and is still ducking my question, I would say 2017 was quite wonderful for me (for meee)!

As far as next year goes, my two main goals are to blog more and record some music (did I tell you I'm working on an EP?). It will take a lot with everything else I've got happening - three weddings, finding time to do my new stand-up set, possibly starting another podcast - but I plan to use this momentum to do all of the things!

I hope you had lots of fun this year, and if you didn't, let's figure out how to make next year super awesome! Whatever you're getting into tonight, have fun and don't be a moron! Woooo! 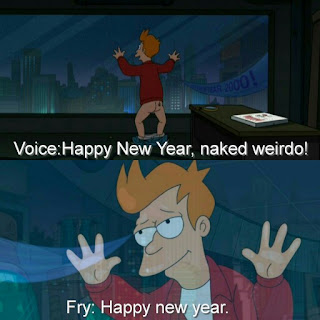