Today I bring you another entry from the "Pat Can't Let Go of the Past" files. Aladdin is one of my favorite movies ever. I'm probably going to watch it after I finish this post, even. So of course I was excited to learn that there was a video game based on the movie - it also helped that my best friend had the system so I could actually play it.

I know there are a few versions, but I want to focus on the Super Nintendo game that Capcom released in 1993: 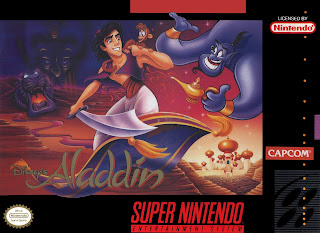 I know that video games based on movies aren't usually beloved, but I think this is an early exception. Or maybe this one came out before they started to suck. Either way, I still have a lot of fun playing this game. Also I recently learned that this version was ported to Game Boy Advance, which means I can play it on my phone, so that is a big plus.

(Note: I know this has been released on Nintendo Switch with The Lion King, but the SNES version is not included in the package.)

If you listened to the show when I did video game previews (I do want to start posting those on here every week, by the way) you know that I love side-scrolling platform games. Super Mario Bros., Metroid, Legacy of the Wizard - it might be my favorite game genre.

I know my high school teachers won't appreciate this but per the Wikipedia page, it sold almost two million copies, which puts it close to Street Fighter in terms of commercial success. Couple that with mostly very positive reviews, and this isn't just me blowing smoke: this game was wonderful. 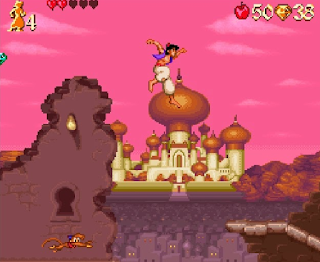 We've touched on this a bit already, but this is solid. You jump on fat guards, fly around on the magic carpet, glide through the air, and can even throw apples. It is challenging - getting out of The Cave of Wonders the first time was hard for 5-year-old me - but not in an "oh man why does this exist?" way like The Lion King (no I am not reviewing that). It is a fun game. Sure it doesn't take long to complete, but it's not so easy that you're bored halfway through it. 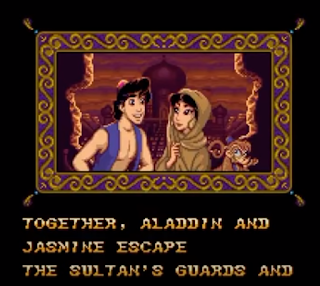 The people in charge of making this game crushed the scenery. When I play through this, I feel like I'm going through the movie (and not just because they included these "cut scenes"). Maybe it's my nostalgia talking, but this holds up for sure. Is it dated? Absolutely. But I don't scoff at it like I do with some older sports games.

People like me who still enjoy older video game music will rate this...score(?) higher than others, but I thought the music was great. You can't lose with A Whole New World, even in 16-bit format. And for some reason, I love the sound it makes when you jumped on a guard's head. To me this game sounded great then and still sounds great now. Everyone wins!

Usually this is where reviewers will put their final score in some big, bold font. But if you've read this far (or anything of mine, really) you'll realize that's not necessary: I loved this game as a kid and I still do now. I am absolutely going to play it on my lunch break today and hopefully I'll get all of the red gems!

If you still have your Super Nintendo or Game Boy Advance, I highly recommend you make sure it still works and find your copy of this game (like Token's bass, everyone has it in their basement). If you don't, well let's just say there's a cheat code in here you can totally emulate it on your PC (SNES) or your phone (GBA). 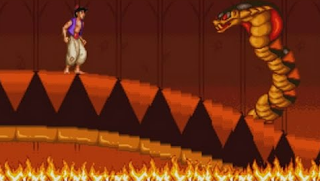 And that's that, friends! When I started this post I thought I would write the equivalent of four pages. Then I realized I am not an actual reviewer and no one wants to read for that long on the internet, so this will suffice. Let me know if you liked or didn't like this game, and/or what other retro games you'd like me to review.

This week on the show we may have an interview, and Danny Schmitz should be back for the next two episodes of The Last Dance. If neither of those happens, then the episode will be something else I haven't even thought of yet. Join me Saturday to find out and until then, don't do anything I wouldn't do!