Morning, friends!
Forgive the cheeky title, but it might actually be perfect for how I'm thinking this piece will go. It won't be for everyone so if you're not into rasslin, you can turn back now. I'll try to write a different thing next week. For everyone else: let's talk AEW for a bit.

I could probably make this go on for pages (or endless scrolls), but I'll try to be as succinct as possible. I have three major issues with how AEW Dynamite was handled last night, and one is a bigger deal than both combined.
Issue 1: Tony Khan should not be the on-screen authority
I love that Tony Khan is passionate about rasslin and has the money to fund his own promotion. The show is fun to watch and I appreciate that people have a place to work. But I cannot take him seriously on TV at all. Jim Cornette once referred to Tony as "The Millionaire Mark" and he was not wrong. And that in itself doesn't really pose a problem. But when you have a guy who is clearly not much more than a super fan coming out to make serious announcements? It just doesn't work. I don't know who the on-screen "president" could be, but it would really help the show to at least make it someone who looks comfortable out there. I get the reasoning behind not explaining why the titles were vacated (more on that in a bit), but the way it was presented just seemed off to me.
Issue 2: The ROH Pure Championship should not have closed the show
Please don't misinterpret this: I am a fan of both Wheeler Yuta and Daniel Garcia. I like that Ring of Honor gets some shine on national TV. I like that this furthered the conflict between the Blackpool Combat Club and the Jericho Appreciation Society. But this match should not have been the main event. By putting this match on last, it is deemed more important than any other part of the show. So if you were tuning in to Dynamite for the first time, you would think that this championship - which is officially not a part of the company - is on par with or higher than the AEW World Championship. It also doesn't help that Yuta and Garcia aren't the most charismatic guys on the roster, so ending what should have been a hyped show with a match under different rules with two guys who aren't main draws hurts a bit. Closing with Bryan Danielson vs Adam Page (a World Title Tournament match) or Toni Storm vs Penelope Ford (a Women's World Title match) would have been a better play.
Issue 3: A chance for a blood feud was sitting right there
Look, I understand why there were barriers to this. But damn how much better does this company look if they had turned the backstage fight into an on-screen story? The quick version: CM Punk called out the Executive Vice Presidents (Kenny Omega, Matt Jackson, and Nick Jackson) during the post-All Out presser. They took issue with this and apparently stormed into his locker room to confront him. A fight broke out and a bunch of people were sent home. Apparently Ace Steel threw a chair at Matt Jackson and bit Kenny Omega. It was bonkers.
But here's my big question: Unless people are considering lawsuits, how do you not just say "fuck it" and let this get hashed out on TV? (A quick answer is that Punk tore a muscle during his match and needs surgery, but he still could've cut a promo during the show.) 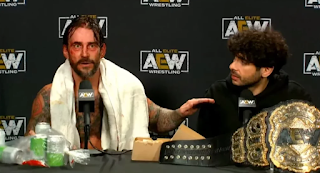 I get that we're in a different era of rasslin and the TV executives have much more influence than they did two decades ago. And from a business standpoint (i.e. we need to stay on the air), this was probably the way to go. But you had your World Champion and three of the guys who started the company get into a legit fight backstage. If an actual promoter was running this company, that story would have been the main focus of last night's show.
People talk about how there's no heat in rasslin anymore. The feuds don't have that spark. This feud had plenty of spark with no one willing to light the match (that makes sense, right?). It also sends a weird message to the audience: Every feud you see is manufactured, and if we get a real one? It will be handled quietly behind the scenes.
And also? The guy who actually seemed to be in a real dust up with management - MJF - had his big All Out return overshadowed by this. If one of your top stars is going to be the second-line story, you had better make sure to get that first one on the show. Otherwise, why are you in the business? They had a chance to take two real stories and let them play out for all of us in what was sure to be compelling television. Instead, because they balked at the first, both of them got clipped. It's just disappointing.
🤼
But again: I get it. The network has a lot of say in what happens on the show. And they were apparently already not very happy with certain elements of it. So if the AEW big wigs couldn't make it work, they handled it decently (though it'd be nice if some up-and-coming talent were given spots in the tournament). While this didn't kill my interest in AEW, it did leave me wanting, and not in the "I can't wait for this blow-off at the next big show" way.
One more point here before we go. I have read that there is "no way" Punk and the EVPs would work together if AEW wasn't blue-balled by WB/Discovery. And as someone who has been following the business for a long time, I have to say that is complete bullshit. If you bring enough money, everyone gets to work. Are any of these guys known for being able to put differences aside and get the job done? Absolutely not. But one of them cut a famous promo about changing the industry and the other three started a company to do just that. As thin-skinned as they might be, I can't believe they would all pass up the chance to act on their goal. I say again: If a real promoter was running this company instead of a super fan? We would be buzzing about this angle for months, maybe years.
So while I enjoyed the show for what it was (save for a few aspects), I can't help but wonder what could have been. And when - or if - a chance to get people so invested will ever come again.
Photo credits: All Elite Wrestling

⇩
(This post was brought to you by Broad Street Bound.)
Posted by The Melting Pat at 9:33 AM