Good day, my friend! Today I am going to hop on the soapbox and rant to you about video game stuff. Our topic is, as the title shows, screen-watching. It is a crappy practice that needs to stop. But before I start complaining, let me throw some positive energy at you.

Here's a fun fact: I. Love. Video games. They are fantastic, and some are way better when played with friends. Together you can enter strange and wonderful worlds to take down aliens, or take out each other. Depending on the game and the group, these contests can get pretty fierce. Different people are good (and/or bad) at different games, which almost always guarantees a fun day.

But, just like with everything ever, there are some jokers who will want to take a shortcut. And these people should be publicly shamed at every opportunity.

I know that local multiplayer is a rarity anymore, so for our purposes we will zero in on a classic: GoldenEye 007 on the Nintendo 64: 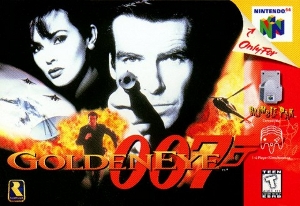 In this game, up to four people can play at once. Each player gets a quarter of the screen to control his or her character. The small size is actually a bit of an advantage for veteran players, since it doesn't allow for much exploration. This can make the game very easy or very hard, depending on your skill.

That is not why I penned this, however. Being good at the game, or even just a certain level, is no crime. Anyone who plays often enough is bound to find some secrets or "hot spots" (i.e. where the best weapons are and where players re-spawn).

The issue is when certain players - jerks - take the liberty of exploring their opponents' screens. I have spoken to some of these dirty screen-watchers about their cowardice. The answer has always been the same: "Just be better at the game!"

Let me pause for a second to point out that I am not a top GoldenEye player, and have never claimed otherwise (though I have finally begun to use the radar, which has improved my outings). Because of this, I have no problem losing, unless I am thwarted by one of these bozos. There is no skill in screen-watching, only poor form. POOR FORM, I SAY!

If you want to brag about knowing the landscapes and weapon locations because you play often, go right ahead. You have earned that, after all. But if you're one of these ######### (sorry for the harsh pound signs) who claims to be good only to stare at the other screens? Please don't play with me. You will ruin the fun for all of us.

Honestly, what are you proving? That you are good at cheating? Congratulations, go work on Wall Street. It is unreal how common screen-watching is, and even worse that there are so many players who are okay with it. New paragraph for emphasis (EMPHASIS):

Screen-watching is not okay and it needs to stop immediately.

I realize it might be a bit silly to get upset over how people play a video game, but it's more than that. When you get together with your buddies to play, it should be fun, no matter how good or bad some of you might be. The experience should not be dampened by a cheater who can only win with a shortcut.

I'll leave you with this: be sure to publicly shame screen-watchers when you encounter them. Not for me or for you, but for everyone. Make them see that games are less fun when they play. And if you are a dirty screen-watcher? For shame - but I'm not mad, I'm just disappointed. (Okay, I guess I'm a little mad.)

That's all for now, friend. I hope you come back next time for another nerd rant, or something completely different!