We Need to Talk: Ugly Sweaters

I hope you are well, and that no one "accidentally" took your lunch from the refrigerator (but be real - you didn't want that tuna sandwich anyway). I have more retail posts planned, and maybe a #fatguy post about cheeseburgers coming soon, but today I need to call out some people for their fashion choices. I don't know how this happened, but we're in it now: the ugly sweater craze has been tainted and I think it may be permanent. 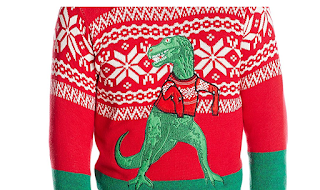 Now as neat as that sweater is - who doesn't love dinosaurs? - it's not what an ugly sweater is supposed to be. I know I've talked about this on the show, but I want to expand on it (or just complain about it some more).

I don't know when this happened, but sometime in the last few years people lost sight of this trend and twisted it into a dumb...thing. Let me be clear though: good on the people who make these "ugly" sweaters and get people to pay bags of money for them. Yeah, money!

But the point of the ugly sweater party wasn't for them to be "ironically" ugly. These were sweaters that were made to be good, but have become ugly because that's how time affects these things.

The idea was that people would go into someone's closet (usually an older family member) and find a sweater that is out of style - one that is "ugly" by current fashion standards. It wasn't a thing someone made to be ugly, it simply was ugly. Then everyone got together and had some nice laughs about how their choices were totally uncool now and quip: "I can't believe this used to be in!" I'm sure it was a fun time.

Now though? People have turned the ugly sweater party into a "thing" and I don't get it. And somewhere else along the way, this became a holiday tradition. I don't know who decided to make these changes, but they're "in" now and I'm not a fan. 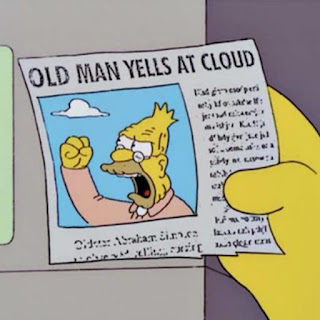 I realize this entire post makes me seem like a curmudgeon, but this has been going on for quite a while and I had to say something. I will leave you with a suggestion though - just for fun: If you attend or host an ugly sweater party, try it the old-fashioned way. Visit mom and/or dad, rummage through the closet, and find a gem to freak out your buddies. Plus, the money you'd save not buying an "ugly" sweater can be used for pizza and stuff! Woooo more food!