I've teased a thing happening on the show a few times, and decided to write it rather than yell about it (mainly because I have thin walls and my neighbor would hear me yelling about him). So here we go! 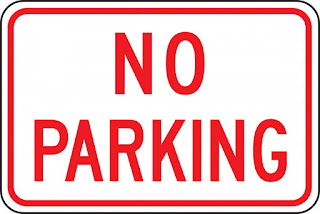 So I guess I should separate this into segments, because it will be easier for me to type and for you to read. Look at me planning ahead! The purpose of this is two-fold: to stop teasing this story and to find out if I'm overreacting to this injustice. Let me know!

Act I: The Request

We moved in on a Saturday, and it was a big "to-do." The following Monday, we saw this dude corral his three young children into a tiny car. He asked Jill if he could park his work truck in our spot. She said: "If it's there today, fine. But don't park there after today." He appeared to understand. I should point out that this was our very first interaction with these people. It was 6:30 in the morning.

A day later (maybe two, whatever), his truck is parked there. Jill goes out and says he can't park there. He claimed he'd been "parking there for a year." She told him the landlord said no parking. He huffed and puffed, then got in to move. I was in the bathroom at the time, right inside the back door - Dump Dungeon! - so I heard all of this. She went upstairs, he either got on the phone or was complaining out loud to himself that he had "never heard of that before" and "I've parked here for years." He pouted some more, then moved.

We had gone out for the day to see Captain Marvel and buy things for the house. This was a few days after the second act. We came home and I noticed he was out there, so I went downstairs to go knock on the door. He must have heard us come in and, knowing we would tell him to move, he got outside first. I opened the door and glared at him before flatly telling him to move his truck. He looked at me and said with all the teenage attitude you can imagine: "I'm moving it now!" This is when I started researching how I could force this guy to move, because I knew this was going to be "a thing." I also got a "NO PARKING" sign for the door.

The following Wednesday, I went around the house collecting the trash. I noticed from the kitchen window that his work truck was parked there again. When I went downstairs to actually take out the trash, I could barely open the back door (license plate blacked out because I'm not sure how legal it is to put someone on blast like that): 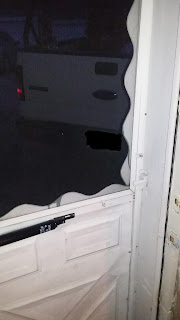 To say I was a bit angry would be an understatement. Their SUV was parked in their own spot and we could hear them through the walls, so they were all home. I banged on the back door, fuming. No answer. I stormed through the house. Jill stopped me before I went out front and made me take 48 deep breaths and have a plan of what to say. "Move your truck; next time it gets towed" I said. She confirmed this as a good idea, so I banged on the front door: no answer.

I had Jill call the tow company, because she was a bit more calm than I was. They told her to call the police, because they can't tow a car without proof that it's parked illegally. She called the non-emergency line (because it's not exactly life-threatening), who told her to call 911. This surprised us both, but she did. The neighbor must have heard that through the walls, because mere moments after, the truck was gone.

The officer came about 45 minutes later. I explained the saga to this point, and was expecting him to say something like: "Well, you don't have a car so he can park there." But he said: "You not having a car doesn't matter. That's your space. He's being ignorant and an asshole. Next time you see him parked here, sneak around the corner and call us. We'll come ticket him so you can have him towed." I considered this a major victory, and figured it could be the end of our story. But it was not to be.

Not even two weeks later, we noticed there was another SUV double parked behind their house. I came downstairs to check on the pigs (whose cage is right near the back window) and saw this dude about to make a move. We have to put our trash cans out back at the top of these "driveways" because one way streets, and the trash hadn't been picked up yet. I thought about yelling out the window as I watched him move my cans to park there, but decided to let him do it and head downstairs instead. He had turned off his car by the time I got there and was sitting in the driver's seat looking at his phone. I glared at him and gave him the old Shane-O Mac taunt:

He pouted like a teenager [again], threw down his phone, and yelled "there's nowhere to fucking park!" before turning on his car and speeding away down the alley.

And that's where we are, friends. I've been telling this tale at work, and one of my colleagues thinks I am overreacting and should just let it go. Another says I should call the city to see what my options are. My barber suggested getting a trampoline and just bouncing on it when they come home. I would, at the very least, like to put up a fence on that side so they have to learn how to park instead of sliding in and stopping with the back of their SUV on our side. We want to keep the spot open for actual guests of ours to park (while I like the stone planter suggestion from some people, it's not an option right now).

With all of that said: what do you think? Should I let it go? Should I keep an eye on the space, ready to call the police? Should I learn to drive, then buy a car to park there myself [the long-term plan]? Let me know in the comments!

Thanks for stopping by, and until next time don't do anything I wouldn't do!