Morning, friends!
Today's episode had a bit of everything: celebrations, a patpeeve [or two?], a sweet tune, and a sports take that already hasn't aged well. We really are back to normal - let's go!
Click here to download the episode! 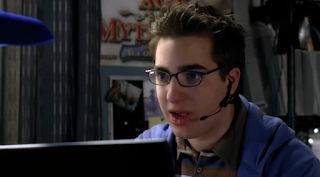 Pat congratulates a fellow network host (3:38), answers a fan question about his old podcast (5:33), and rants on fast food breakfast times (12:06) and chanting for other teams (15:31). Plus notes on the Phillies and the Kraken (18:34), a new tune from A Story Told (22:24), and celebrating the Bucks - featuring Danny Schmitz (27:14)!
🎧
What Lurks Behind Podcast Zero
Big shoutout to our network pal, Paul, on Episode 100 of his podcast dropping this week! Check out his show here - if you're into horror, I think you'll love it!
The old show
Thank you to the person who asked about the first version of this podcast. It was neat to try to jog my memory about that failed endeavor. Also it really makes me appreciate how much I've been able to do with this show over the last six years. From I where it started to now, it's kinda remarkable to me!
Fast food breakfast
I don't know who decided that breakfast stops at 10:30am, but I'd like to wish them weeks of stepping on Legos and running out of toilet paper. Serve us breakfast all day, you cowards!
Sports chants
I'm not sure if this is only a Philadelphia thing, bur that's what I know it as so I'll repeat myself here: stop chanting for the Eagles at Phillies, Flyers, and Sixers games. It doesn't make you sound cool or fun.
The Phillies and The Kraken 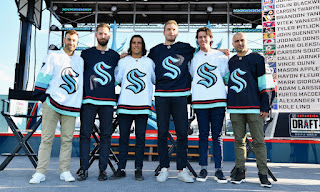 Of course since I recorded my "Phillies should make the big move" take, they haven't won a game. But they are four games back of the Mets, who are not exactly playing lights out baseball right now. So maybe the point still stands? Also up top to the Kraken for drafting their squad. I don't know who a bunch of those players are, but I know Josh is excited so I can be too. (Image: USA Today)
A Story Told
Many thanks to our friends for the tune! Their new album, American Made, is available now so go get the thing and tell them I sent you (link goes to bandcamp)!
Milwaukee Bucks
As you can tell, I had to shoehorn my praise for the Bucks after I finished the rest of the show. But the sentiment remains: winning a title without creating a super team - even eliminating one in the process - is awesome. I'm happy for those fans and I thank my friend, Danny Schmitz, for stopping the party to join us for a minute. Fear the Deer!
🏀
And that's that, my friends! We made it! Next week we may have a guest, so come on back and find out who it is or if I'll be yelling on my own. Until then, don't do anything I wouldn't do! (Also check out my Patreon here!)
Crap open a cold one! 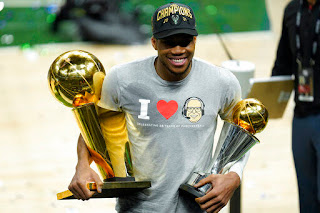