Hello, friends!
Wrestling had a big weekend recently with a big debut and some big returns. I generally have no interest in ratings or merchandise numbers, but even I know that the industry clearly does not have the same reach as it once did.
But this past weekend made me wonder: Could this start an upswing? Or has that ship sailed? 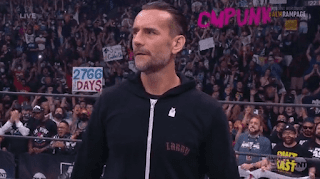 ⇩
(This post was brought to you by Broad Street Bound.)
Posted by The Melting Pat at 10:09 AM