Fighting on the Internet

Hello, friends!
Today I want to talk about people fighting on the Internet. I don't know why this happens with adults, but some people are just too eager to air their nonsense in public. Does it help anyone? Maybe the people reading who now know to avoid certain subjects or online connections. But for the most part, it's a futile exercise. Let's see where this goes, shall we? 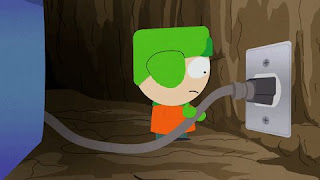 Look, as a teenager I cut my teeth on Xanga, MySpace, and a guitar message board that was filled with some of the most sanctimonious jerks you can imagine. I have no interest in dealing with any of that as an adult. It's a big reason why I think the MySpace bulletin feature needs to make a comeback. The only ways to really respond to a bulletin were to privately message the poster, or make a scathing reply bulletin of your own. But even with the latter, there was a chance that not a lot of people would see it or even care about what was happening. It was the best and I'm glad that spacehey has brought it back into the universe - if even in a small way.
If you were on social media before Facebook switched to the timeline layout, you probably know what I mean. Sure you could post messages on people's public profiles - as their settings allowed - but no one else could make comments on those posts. This meant if you posted something like "none of the planets are actually round," no one could publicly dunk on you. This was also during the period when you couldn't tag people in posts either, so there really wasn't a way to call someone out where everyone could see it. It was a much better time to be on these sites. Your crazy uncle couldn't dump his insane conspiracy theories in public. They were neatly contained to his profile (or someone else's wall, but that's better than the current alternative).
Is this piece going to take a turn? I think it is!
🙈
Indulge me for a moment, won't you? I made a joke example up there about how no one could jump in and argue with you in public. That point stands, but also the lack of a timeline/news feed feature kept us from these diatribes disguised as discourse. Think about the times when someone shared an opinion on people in transition. Even if the original poster said something like "yes, people should be able to live how they want," how did the comments look? Undoubtedly there was at least one person spouting off about God's will, bathrooms, or people wanting to marry their dogs - seriously, that's a weird go-to for a lot of people. [Random connection here: the irony of Caitlin Jenner now being a Fox News contributor is not lost on me.] It's insane.
I'm not saying we have to agree on these, or any, issues. But do you see the problem? When your friends or their friends have the ability to drop their hot takes on your thread, it can create problems. I once shared a thing about people "just wanting to go to the bathroom" and the number of morons - only two who I actually knew - jumping in about sexual predators was off the chain. I have since both learned how to limit replies to friends and stopped sharing serious topics on Facebook. My experience has improved drastically.
Being so connected to the world is wonderful. I can search for wrestling forums and easily find people from all over the world to chat all things WWE, AEW, and why the AKI/THQ Nintendo 64 games are still top-notch. But the drawback of that is the current state of social media. Before we could make public threads, these flame wars were kept to forums or personal blogs, and they were kind of anonymous at that. Your mom wouldn't know that the guy who fixed her roof was actually super racist, because before a certain time, people kept those thoughts to themselves. I'm afraid we can't put the proverbial genie back in the bottle, but I do long for the simpler days of online interactions.
And maybe I'm being pessimistic in thinking that if Facebook hadn't created this public timeline, someone else would have. But sitting on that thought seems counterproductive because the reality is that Facebook did do this and it has made everything terrible. Yes, I know Twitter existed before this switch happened. But how many people do you know who go on these Facebook rants even know how to use Twitter? The answer, at least for me, is "very few, it seems." So am I blaming Facebook entirely for this? Yes. Yes I am.

I get it: Facebook is good to keep up with people who don't live nearby. But the implementation of the timeline meant that you now have to see [before you change some settings] their weird and/or offensive opinions about whatever is happening. And because everyone should "be connected," their dumbass friends can join in too. I don't want to believe that this current shitshow was the plan when Zuck and the boys rolled out the timeline, but I have a feeling they're not miffed about it either.
So now what? People are always going to have opinions. And those opinions are sometimes [often?] going to be "controversial." It just seems like so many people have lost the ability to have actual discussions in the last few years. Where to place the true blame - Facebook, politics slop, cable news channels - I'm not exactly sure. But I do know that everyone being able to drop their thoughts in the digital public square is not exactly helpful. I realize that I can't stop this, and it would be foolish to try. But that a lot of these sites let you limit who can see and interact with your posts is a step in the right direction. Now if only Twitter would let us limit quote tweets...
💬
I guess the best advice I can give to avoid the urge to argue online is to treat the posts like your school bully: ignore them. Unfollow that person, block them if that's better for you. Limit who can respond to your posts. You can take it a step further like I did and stop sharing the serious stuff, but I know not everyone wants to do that. Trying to have a discussion is fine, but when literally anyone [by default] can jump into it? That's a problem.
There was a point in here somewhere, but I'll be honest and tell you that I've lost the thread. To recap: The Facebook timeline feature made it easy for people to share information. This is good and bad, because now anyone can sully your page with their textual feces. I will no longer be joining those slinging matches, and I urge you to do the same.
Some parts of the Internet have become terrible. It's time we try to change that, one click at a time - or a few clicks so you can join spacehey with me. (Or maybe Kyle has the right idea up there.)
Crap open a cold one!