Morning, friends!
Had to call an audible today because I'm a dope, but we had some fun - let's go!
Click here to download the episode!
To get a pre-show bonus segment and the video version of this episode, subscribe to my Patreon. 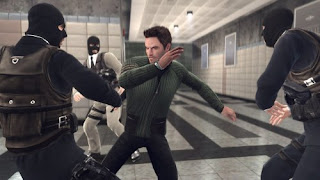 Freddie Prinze Jr. rasslin
I love this. He's a fan of the product, he's worked in the industry, and he has the name value to get people on board.
The Bourne Conspiracy
I'm not that far into it, but this game is fun. So far I'd recommend it - even if you're not a big Bourne fan. I feel like the gameplay would be fun for lots of you out there. Also let me know if my Bourne-Bloodshot crossover idea would work (but don't spoil Bloodshot for me!).
Going back to cable
I wrote about this the other day (read that here) but I keep seeing people make this misguided argument. That's probably my fault because I'm feeding the algorithm but the point stands: Until someone has to come to your house to plug stuff in, we're not back to the old ways.
📺
And that's that, pals! We made it! Next week will be the interview since I now have what I need, but I hope you enjoyed this impromptu episode. Come on back for all of the fun and until then, don't do anything I wouldn't do!
Crap open a cold one!