Full disclosure: this post was supposed to be up on Monday, but I was a bit over the weather on Sunday so I could not write it then. But that did give me time to gather some information so it worked out okay [I hope].

Today I want to talk about baseball jerseys that are clearly fake - like in the picture below. This is an issue that has plagued my mind for at least a decade, so it could get a bit silly. I'll do this at the end too, but thanks to everyone who weighed in on this topic so it became more than me yelling as I type. Here we go!

(Answers have been edited for clarity and length.) 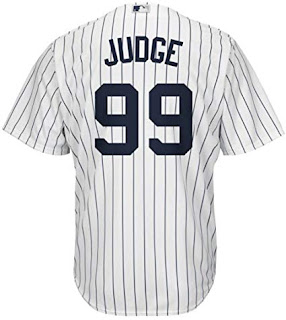 If you're not a baseball fan, first of all thanks for still being here. Second, I need to clarify what I mean by fake. In this case, a fake jersey is one that has a player name on the back when the on-field jersey has no name. Currently the Yankees (home and away), the Red Sox (home), and the Giants (home) do not have player names on their jerseys.

My issue - patpeeve, if you will - is that these jerseys are everywhere and they look ridiculous. (Also they sell for full-price: $119.99 for that Aaron Judge jersey on MLB Shop.)

Like I said up top, delaying this post gave me a chance to talk to some people about this. My good pal, Brian [a Yankees fan], had this to say:

"I don't actually mind them, except if it is a jersey clearly meant for one person (Jeter is 2, Ruth is 3, etc.). People who want jerseys are going to get jerseys, but I hate how they are sold for the same price as the non-named jerseys. They should be cheaper because they are not truly authentic. I only have one jersey and it is Jeter: no name, but it doesn't need one. I usually buy t-shirt jerseys."

I can't believe I'm typing this, but it's good to get a Yankees fan's perspective on this. They are quite the famous franchise, so their fans are everywhere...committing this violation. Look, I get it: jerseys are expensive. But if you're spending the same amount of money to wear one, you should at least get the real thing. You know the player who was wearing the number when you bought it. Shouldn't that be enough? 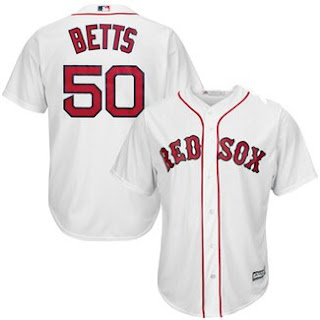 Speaking of Yankees fans, Matt (who will return to the podcast in a few weeks for a WrestleMania preview) weighed in and took some shots.

"I'm not a big fan of button-up jerseys in general. I think it's like a kid wearing Superman's cape to a comic convention, and at a certain age it's meh. But I see why they are fun to wear. The fake ones though, I think they're fine - only the elite fans recognize it - and if so, they are the losers for realizing it [if a stitch is out of place]. But if you're a jersey-wearer, it also represents your level of fandom. Last name on a Yankees jersey obviously means you're a casual."

Matt initially thought I meant knock-off jerseys, as did a few other people, which means I goofed when writing the question. But I am also not a big fan of button-up jerseys. I own two and both were gifts: a Chase Utley All-Star jersey from my mother-in-law and a nameless red Phillies jersey that my dad won in some raffle.

And do you want to know a secret? I have worn them maybe eight times total. I'm on Brian's side with the t-shirt jersey plan.

There are two points Matt hit that I'd like to address. First, the noticing [and likely being mad about] a stitch being out of place on someone's not-quite-authentic jersey. Jerseys are not cheap, friends, and supporting your team shouldn't mean you have to eat Ramen twice a day until that next deposit comes. Most knock-offs actually look pretty good these days, so pointing out that a letter is crooked or something is like a cow's opinion.

Second, and I know I touched on this already, but the level of fandom: oftentimes these fake jerseys cost the same as an actual jersey. And, again, you may as well buy the real thing at that point. You're "telling on yourself" twice with these fakes: that you're both a casual fan and irresponsible with money. Get a t-shirt jersey and use the money you save to buy two beers at the game. You'll get much more use out of both of those anyway.

This is my fault for wording the question poorly, but my dudes Seph [a Braves fan] and Damian Rey [a Padres fan] seemed to be musing on actual knock-off jerseys rather than the fake ones that have me bothered. I wanted to include them, though, because they made a solid argument.

"I have had a couple fake jerseys through the years and I have no issue with them. I would buy official merch but it's too expensive unless you catch a really good sale or something. Everything about professional sports is too expensive at this point. Knock-offs let more people celebrate their fandom. Also I'd buy a [legit] Braves jersey if they ever stop letting me down and win another World Series."

"The only official merch I own was given as a gift. $120 for a "replica" jersey with a plastic logo stitched on is ridiculous when I can instead pay $20 and get an authentic knockoff. The knockoff is close enough to the original that it's not easy to tell, and I just saved at least $100. The only gear I buy full price are hats, and even then, my store membership gives me a discount."

While it's not exactly what I was looking for, I completely agree with it. Fully supporting your team is expensive, so there's no shame in taking a financial shortcut here. But like Matt said, your casual fandom is showing when you wear a clear ripoff. (Also store discounts are the best and you should take advantage of them when you can.) 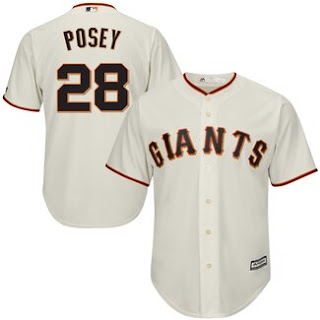 I think a good way to wrap this up is to hear from the two dudes who will join me on the podcast this week. Once I clarified my definition of fake for this exercise, Phil said "Nope not for them, it has to stay authentic to what's on the field." That thinking is a big reason why I wrote this, so it's great to see someone agree with me.

As for our mystery dude? "They [these fake jerseys] suck. Walmart sells these. Walmart sucks." There are plenty of reasons to dump on big box stores, so I am all the way on board with adding selling these abominations to the list.

So what did we learn today?


The bottom line for me is this, friends: Your Yankees jersey with JETER or RUTH plastered on the back looks ridiculous. Do not waste your dollars on that trash. Get a real jersey or get a t-shirt and spend the money you saved on a good haircut.

There we go, I feel much better now.

Saturday's podcast is a rasslin show, so if you're not into AEW you can rejoin me on March 7 for my normal brand of whatever it is I do. Enjoy yourselves in the meantime!