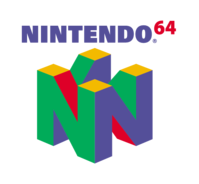 If last week's section didn't rally the troops against me, the final two certainly will! We've reached the top ten and I am excited to share my...favorite favorites with you. If you want a refresher, check out the rest of the list:

Done and ready to shake your head some more? Good. Here we go!

Some of you may wonder, "Pat, how the hell can you put this so low?" And to you I say two things: It's at least in the top 10, and the game you're comparing it to will come next week.

Look, I enjoyed this game. I really did. It took what GoldenEye had and improved a bunch of it. My two favorite parts of this game are the bot training challenges, and the gun that lets you find and shoot enemies through walls.


But since this is my list of "games I play most" and not "best games ever," there are several titles ahead of it. Still, this game is awesome and worthy of a high ranking on any top N64 list. So go save the future and stuff!

I did a full review of this game already, so I won't dive into it again. Although I guess I could since it's so high on the list...

Anyway, this game is still super fun for me and you should join me to play sometime. It'll be great!

Ah yes, another game that is great for ruining friendships. While not the original, this is the one I always think of when someone mentions Mario Kart.

Red shells. Lightning bolts. Stars. And the wonderful - or terrible if you're in first - blue shell. The courses are fun and plenty challenging as you progress, and each character has strengths and weaknesses. Sure there's time attack and the unlockable "mirror mode," but let's be real: Battle Mode is what brings you here. 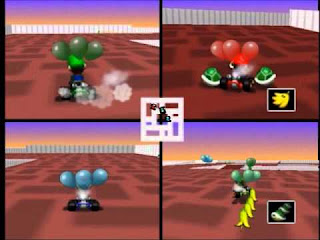 Four arenas (Block Fort #1) to choose from to humiliate up to three of your buddies. Plus, if by some bad luck/collusion you get taken out, you can become a bomb kart and ruin someone else's fun. If that's not awesome, then someone altered your dictionary. Do it up!

It was really hard for me not to rank this higher. This is the game that made most of America realize there are other pro skaters than the title character. And helped me realize the skate deck I need to display in my future home. But I digress...

I will say that as awful as I was at the multiplayer modes (graffiti especially), they were still fun. But a main reason this ranks here is replay value. Yes, I have unlocked everything several times. Yes, I have set all of the high scores. And yet, I was just playing this game minutes before writing.

The collection of skaters is great, even though I knew who maybe two of them were at the time. The boards you can unlock for each [mostly] look great. The controls are super easy to master. And the different locations for the levels look amazing, especially when you consider the release year. All of that - plus the wonderful soundtrack! - keep me coming back, no matter how often I've done it.


So skate on, my friends, and watch out for the psycho bitches!

I have no idea how many times we rented this game before one of us decided to buy it, but what a great choice that [finally] was. For a game that has influenced many modern shooters, I don't think it gets enough love. And before you say it: yes, I am aware that this is essentially Metal Gear Solid on N64. I also don't care because this game is super fun on its own.

You play as Jean-Luc Cougar as part of S.C.A.T.: Special Covert Action Team. Your mission is to infiltrate the enemy base before they fire their super space laser at the White House. Along the way you'll encounter enemies (so many!), traps, puzzles, and stuff that explodes. The element of surprise is key here, so the run-and-gun style won't do you much good. The strategy, the story, the rocket launcher - all of this and more make me love this game. 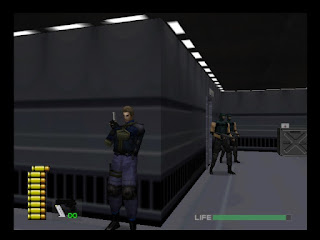 Do yourself a favor and give it a playthrough. Be sure to move quickly and avoid the lasers! Also laugh with me about the time Bill fired a perfect strike with his controller at the game because Bump and I inadvertently teamed up to kill him in multiplayer. A million to one shot!


That's it for this week, friends. Let me know how wrong I was in the comments, and come back next week for the top five! Crap open a cold one!