Since I won't be able to talk about this on the show for a bit, I will tell you here. And yes, I realize I should have written this on Friday when it was fresh. But I was tired and stuff, so I'm doing it on Sunday instead.

I'm happy to report that I finally did a thing!

I went to see/hear some sweet tunes at Voltage Lounge on Thursday night. There were reasons why I almost didn't go - the biggest being that I was alone. I knew I was going to have a tough time because being in crowds and talking to people utterly terrify me, and I figured having someone with me would help curb that. But it was actually better that it was just me: I didn't have to talk to anyone, and I could just stand back and enjoy the show.

And that, my friends, is exactly what I did.

The bill was Point North [good friends of the podcast!], Hold Close, Sharptooth, and As It Is. The only band I knew was Point North, so I basically "went in blind" for three-quarters of this show. I did feel bad that I couldn't join in singing along, but it helped that I really had to listen to the songs since I was hearing many of them for the first time.

It worked out well for me that the band I knew went on first. I got to hear all of the songs I knew right off the bat, so then I could scout the merchandise without missing any of my main event. The set was awesome - they played the two songs I wanted to hear most (Never Coming Home and Dearly Departed) and just *coin* crushed it. 10/10 - would see again. 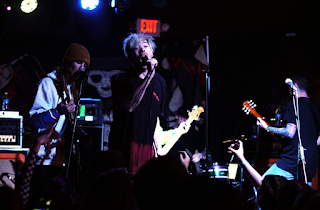 The second band up was Hold Close, and their tunes were different from everyone else on the card. I think they called themselves "the most chill band" on the tour, and that is wonderfully accurate. The melodies are lovely and their harmonies are wonderful. It was a good change of pace for the show, especially considering who came next on stage. I would definitely see them again, and I have reached out for permission to play their music on the show. Fingers Crossed! 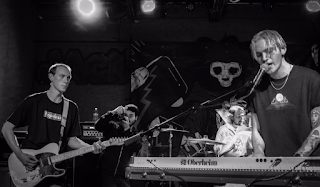 Before we talk about Sharptooth, a brief intermission: I stopped by the Point North merch table and bought a shirt (it is one of the most comfortable shirts I own). On my way back to my new viewing spot, Timmy from Point North noticed I had one of his shirts. I said: "Hey man, you were on my podcast about a year ago..." he stopped me and said: "The Melting Pat, holy shit!" I was floored. It was unreal to me that he not only knew who I was, but was pumped to meet me. We had a nice chat, and it was so wonderful to meet one of my favorite show guests. (He didn't get a cheesesteak though, so that's a deduction.)

Okay, so I'm really glad I made my way to the upper level for Sharptooth because I was NOT prepared for all of that. I'm also too old to get moshed on/about, so it worked out well. This band goes so goddamn hard, friends, and the crowd followed suit. There was a girl who was crowd surfing for every band, and at one point she was dropped by the mob. It was hilarious. Going from the chill sounds of Hold Close to this was much like a transition on my show - but this was, you know, good. If they're on a show, I would see them again (and this time I'd be prepared). Also their lead singer climbed up the outside of the stairs to join us in the upper deck during a song - that was amazing. She was about two feet from me but I couldn't get a good picture, so here's a low-quality one I took with my ancient phone: 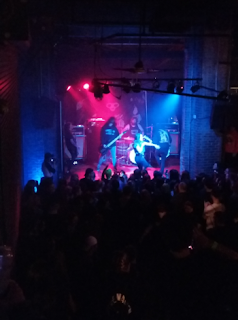 The main event for the evening was the band from across the pond, As It Is. I listened to them right after I bought the tickets, so I at least knew what they sounded like - more Point North than Sharptooth for sure. I just have to say, and yes I know they were the headliner, people were all about these guys and that was awesome. People sang every word. Members from the other bands joined in on some songs, which got big pops from the crowd. They covered The Postal Service (Such Great Heights is a total crowd-pleaser). I hate comparing bands to other bands for their sound, so I will instead direct you to their tunes so you can [I hope] enjoy without any bias from me. If they headline or support another tour in town, I would absolutely see them again. 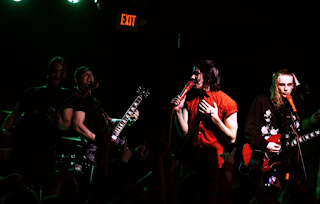 Sometime in between sets, I wandered back to the Point North merch table to meet some members. I was able to thank them in person for letting me feature their tunes on my podcast. I realize this may be silly to some of you, but it means a lot to me that bands let me share their sounds with you. And it was wonderful to be able to get over my anxiety and go talk to them in the first place. That they were genuinely happy that I wanted to play their tunes was an awesome bonus.

I will admit that I made a mistake after the show ended. I was standing close to where the bands were, and let some people file past me. I then realized I wanted to go back to get a picture with Point North, so I had to squeeze through that crowd I "created." Once I talked to the band again, I got out of there as fast as I could - I was done dealing with the smelly people who had no sense of the most basic courtesy of moving to let people pass. (I did mention that I don't do well in crowds, right?)

Also also: I gotta put myself over. I usually don't do well in crowds. I feel completely out of place, especially if I'm alone. But tonight was really good for me. I felt weird, sure, but I was able to get outta my comfort zone & really enjoy myself. Pat: 1. Anxiety: 247m.
— Pat Johnston (@TheMeltingPat) February 8, 2019


I had another thing to say, but my tweet from Thursday sums it up. I'm happy with the big step I took, and next time I will work up the courage to talk to bands I don't already "know." I would go to a show by myself again, and I would also go to The Voltage Lounge to see it. If you're worried that people might be all "wow what a weirdo" like I was, just focus on how much fun the show is and you'll be great!

ALSO: I want to highlight two of the organizations that were mentioned by the bands. I love that all of them are on board with activism and the simple mantra of "be good to each other." A Voice for the Innocent and Half/Access are wonderful and I just want you to be aware of them. Do good things, friends!

A long one this time, I know, but that's all of it! Until next time, don't do anything I wouldn't do!

(I look ridiculous in the picture I got with [most of] Point North, so I threw a spoiler tag on it.) 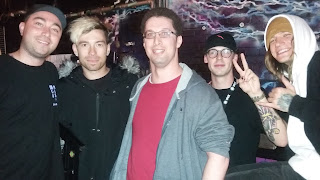