Today's show was going to be short, but then I got to rambling and well, you'll hear the rest. We covered anniversary parties, favorite moms, fan mail, and a bunch more. Let's get to it! 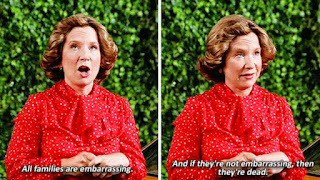 I did it! Well, almost did it. This is the first episode recorded in my basement/garage studio, and I feel good about how it sounded. It was super hot, but that is easily fixed. And I know it will sound better once I get the panels up, and that it will look better once I clean the cube walls and add some artwork. It's a process, but I know it'll be great once it's done!

I learned a few things: I am horrendously out of shape. I am not good at cornhole (undefeated, though!). You can't go wrong with pulled pork. And finally, parties in the park are wonderful. Thanks for having me, Tom and Jen!

This was a big one. And I realize that I did not pick a favorite, but it's my show so I get to do that. I don't know why murdering for your children makes you a good TV mom, but it seemed like a good barometer. (Lorelai Gilmore would also definitely murder someone for Rory, by the way. But would Danny Tanner?)

I know the transition from Linda's singing was subdued, but during most breaks I tend to cough a whole lot. My bad. Also I didn't use the version with the music because I think the setup of Tina asking about the song makes it funnier. Anywho, there are a bunch of games here that I hope to play. I may check out one of those racing games, but I think I'm most looking forward to the shadow puppet sword-fighting. Who lives nearby and has a PS4?

Thanks so much to our friends for their sweet tune! You can get it here, and check out their live performance album on bandcamp! Now how long do I need to wait before playing another? Because I should really have them on the show at some point.

Not much in the way of a league update, but the Phillies might be back on track thanks to some bamboo! They swept the Mets (of course they lost the day I recorded) after being trash for the previous week - a good sign heading into the break maybe! Also a note to fans: stop running onto the field. And while we're here: stop reaching over the fence to grab home runs.

I hope we all learned that Pat doesn't do research, which leads to half-assed answers to fan mail. I don't know why baseball is weird, but I do know that if you pester someone enough, he will cave and go along with your poor attempt at humor. Everybody [hits] wins!

Favorite TV dads, a patpeeve on the portapotty, and I don't know what else. Toss me some suggestions, pals!

And that's that, friends! I'm off to try to do DDP Yoga for the 4th time this week, so let's hope I don't fall over!