We are one week away from pitchers and catchers reporting and then a few more days from full squad workouts (February 17) - hooray baseball! So I want to take a look at the projected roster of my favorite team and try to realistically predict whether or not I can get truly invested in October baseball this year. [All stats are per Baseball Reference, unless otherwise noted.]

The Phillies enter 2020 looking to rebound from a disappointing 81-81 finish in 2019. Injuries, and then ineffectiveness, plagued every aspect of the team. Moves have been made and guys should be coming back healthy, so in my mind they have hope. I know, I know: just about every team's fans have hope in February. But I think there is too much talent on this team for another .500 performance. A new manager who "knows how to win" (such a weird sports phrase) in Joe Girardi should bring a much-needed new voice (I'm on fire here) to the club. With that in mind, let's do the stuff! 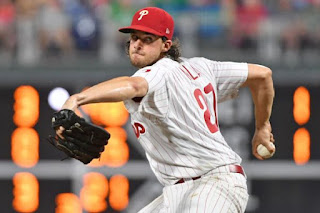 The biggest issue. arguably, is pitching. The team took a step to address that by signing Zack Wheeler to a five-year contract. Despite some injury (and possibly effectiveness) concerns, he is for sure an upgrade. I think he and Aaron Nola will do well to lead the rotation for the next handful of seasons. Beyond those two though, there are question marks.

Jake Arrieta, Vince Velasquez, and Zach Eflin are projected to be in the rotation as of today. All three have certainly been effective, but they have also had their issues.

Arrieta (135.2) pitched his fewest innings since 2013 due to an injury in his pitching elbow (bone spurs). Given his track record, I am optimistic that he will settle in as a consistent #3. But it is tough to know how well his arm will hold up after surgery.

Vince Velasquez has shown flashes of being a quality starter. He has also shown flashes of be a very good relief pitcher, and I have advocated for his move to the bullpen in the past. Whichever role he is assigned, I hope he gets to stay in it. With Gabe Kapler gone, I have hope that we won't see the team try to "get creative" with moving guys around.

Zach Eflin was given a long leash last season - his 163.1 innings were the most he'd ever thrown in the big leagues. He had a rough month of July like the rest of the team, but half of his starts were quality (at least 6 innings pitched while allowing three earned runs or fewer). If he, like Velasquez, doesn't get bounced from the rotation to the bullpen I think we will see marked improvement. 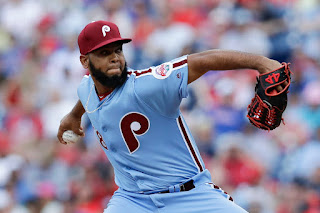 Speaking of question marks, there are a few big ones here. Adam Morgan, Seranthony Dominguez, and Victor Arano are the three that stand out among those projected to make the big-league roster. If they can all regain at least some of their 2019 forms - and guys like Hector Neris, Ranger Suarez, and spring roster invitee Francisco Liriano repeat their recent success - this unit should be the strength it was supposed to be last year. And I'm not even taking into account that J.D. Hammer, Damon Jones, and top prospect Spencer Howard could all make significant contributions with the way teams shuffle bullpen arms anymore. There is a lot to be excited about with this group, but it doesn't come without risk.

Also while I'm here: I'm not sure why Nick Pivetta is being talked about for the rotation. He was not great last year, then complained when he got moved to the bullpen for not being great. Fingers and toes crossed he can finally put it together in any role though! 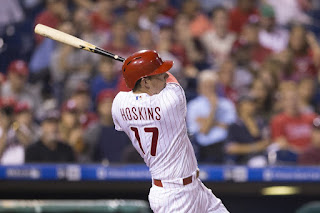 I thought about going one-by-one here, but then I realized I'd have to give each guy equal space and I'm just not prepared for that. But here I go to highlight as many as I can.

You've likely seen plenty of stories this offseason about Bryce Harper ("was that contract worth it??") and J.T. Realmuto ("will he sign a long-term deal?"), so I don't think I need to dive too deep there. I think both of them will be productive once again. Before last season, Scott Kingery was certainly not a favorite. He wasn't hitting well and some speculated that his moving around the diamond did not help. Now? He is penciled in as a key cog in the lineup because he figured out how to put it all together.

I still maintain that last year's squad never recovered from Andrew McCutchen's injury, as they could never find an adequate spark at the top of the order. He is expected to be ready by Opening Day and should slide right back into the leadoff spot. For the sake of the offense, let's hope he is at least a fraction of his last-April self.

Speaking of early last year selves, Rhys Hoskins is a guy who could use a time machine. Is that too strong? Maybe, but his struggles are well-documented and the team is going to need him to be a presence in the middle of the order.

The middle of the infield is both new and [hopefully] rehabilitated. The tandem of Didi Gregorious and Jean Segura will need to be consistent on both sides of the ball, and they will both need to be true to recent form if the Phillies hope to take the next step (I'm seeing quite the pattern here).

It feels like a bad omen to include a projected starter in Adam Haseley as a question mark on the same level as some of the bench guys. That's not to say that Haseley and guys like Jay Bruce, Roman Quinn (both coming off injury-plagued seasons), and Josh Harrison can't move the needle. They are still in the big leagues because THE MAN thinks they can. My concern, as it is for many players on the team, is their ability to stay healthy - especially Bruce and Quinn for their power and speed, respectively.

This could change if third base prospect, Alec Bohm gets called up and hits the cover off the ball. But for now I'd like to stick to who is already "in the show." 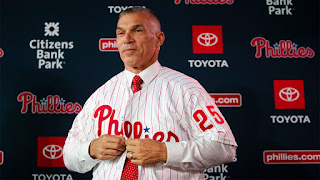 Okay so I don't have a ton to say about Girardi that hasn't been said already, I just felt like I should use another picture to end this. There is much work to be done, but like I said above: there is too much talent here for another mediocre finish. Am I predicting a playoff run? Even though that was my original idea with this piece, I am not prepared to go out on that limb. I will say that I believe the Phillies will be in contention for at least the Wild Card in September. Is that bold enough? It's February, so I guess it has to be.

I was going to wait until March to do this big write-up, but the NFL just ended so now I'm super excited for baseball to start. Let me know if you'd like me to ramble about your favorite team either here or on the show, and let's all get excited about the new year!