Show notes - Episode 231: Almost the Greatest Ripoff of All Time

Because I'm on vacation, this will hit your fancy podcast places on Friday and the social places on Saturday. Doug and I turned a segment that I thought would last ten minutes into a full episode. I don't have much for notes today, so here's the stuff! 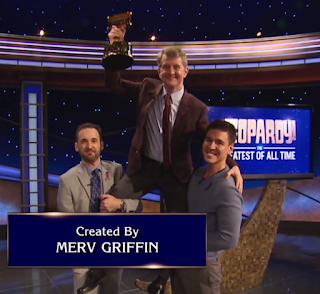 Pat welcomes back Doug Coleman (Almost Better Than Silence, Missed Out Records) to ramble on the Jeopardy!: The Greatest of All Time tournament (3:53), breaking up via text (22:53), and how Doug is going to start ripping off The Melting Pat (28:57)!

It took me six tries to get that screenshot, so I'm going to give myself a bonus right off the bat. I really thought this segment would fit right in with Episode 227, but then we ended up going long so I decided to make it a full episode. So I hope you enjoy the fun we had and that you go listen to Almost Better Than Silence and the artists of Missed Out Records.

Next week will either be a regular episode or a show recorded at ski weekend, so either way I'll be back with more awkward pauses. Until then, don't do anything I wouldn't do!