Every Wrestling Game Should Have a Cartoon Referee

Hey, pals!
This will be brief, because I don't think there's much of an argument against this point. But let's jump in here. 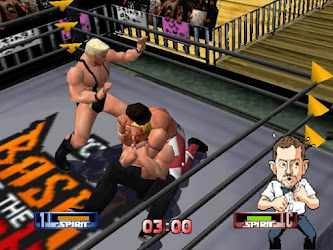 Maybe I'm naive, but I don't get why rasslin games decided to move away from this dude (and his WWF counterpart) and go with putting another "person" in there. It was not a good change.
With another character in the ring, sure it adds some realism, and I get that some people want more of that in games. But the trouble with that is that real referees can both get in the way and be caught out of position. And as fun as it can be to suplex the zebra, it can cause him to be late to count your victory (or disqualify you from it altogether).
The biggest negative for the referee character comes when you are fighting outside the ring. If falls don't count anywhere - meaning you can only win inside the ring - the referee will still follow the action to ringside. The problem with this is that he won't get back into the ring as quickly as you do, leaving you waiting during a pin attempt. That extra moment or two can make a difference.
With a cartoon referee, you don't have to worry about accidentally hitting him. You don't have to worry about whether or not he'll be in the proper position to count the fall. He stays off screen until you need him. It is perfect and to this day I do not understand why the change was made. (Aside: It was much more of a project to get this screenshot than it should have been.) 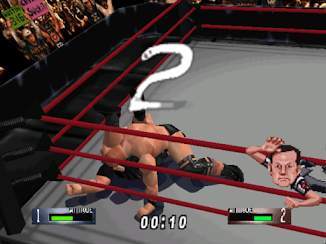 Now that I think about it, the animated referee was removed from No Mercy. A rare minus for that game. In any case, the point is this: cartoon referee - good; "actual" referee - bad. If there is a compelling argument to be made against this, I would love to hear it. Let me know how wrong you think I am!
This week on the show, I may interview a new band (scheduled to record tonight), along with some fan mail and weird stuff we've found in our houses. Until then, don't do anything I wouldn't do!
Crap open a cold one!


⇩
(This post was brought to you by Broad Street Bound.)
Posted by The Melting Pat at 11:54 AM