Show notes - Episode 256: Wake Me Up to Trot Outside the Bubble

Morning, friends!
I debated making this episode only the interview, but how much fun would that really be? We covered some ground and got to play a sweet tune - let's get to it!
Click here to download the episode! 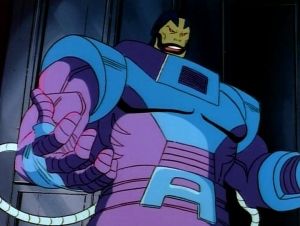 Pat rambles on two garage problems (2:36), getting more exercise (8:33), Neon Abyss (11:15), crossing movies off the list (13:23), some MLB news (17:20), an NBA bubble update (21:20), a new XFL owner (23:40), and a Flyers Update from The Captain (25:43).
Then Pat talks to Paul McCoy from 12 Stones about going independent, being the Bring Me to Life guy, the thrill of live shows, and more (31:30) before playing their latest single, Sever (1:06:36)!
♭
GarageBand
If anyone knows of a good Windows alternative, or has a Mac laptop they no longer want, please let me know. I miss using GarageBand and I think it could really help with the show and stuff. None of the "best programs like it on Windows" have been very good, in my experience. Thanks!
Repair update
Nothing changes if nothing changes, right? Actually something did change: things got worse. I don't know how this can be fixed, but I would like whatever that is to be done soon.

Taco Bell Trot
Unofficially, but this is essentially the plan: walk that 2.6 miles before work. I only got to do it once because we had a lot of rain (and I woke up super stiff on Thursday), but I think this will be good for me. I also started doing another one of those 30 day challenge things (pictured), but who knows how long I'll stick to it this time? Update: I did walk to Taco Bell this morning, which is why the show is late today. The breakfast was delicious because I earned it, dammit! 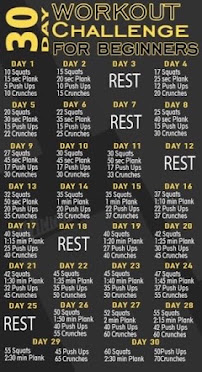 Neon Abyss
This game is so much fun. I didn't know a thing about it, I just liked how it looked. So I downloaded the demo and got sucked in immediately. I've been streaming it on Twitch a bunch, so you should join me over there for some of the fun! Here's a screenshot I took the other day - I got wings! 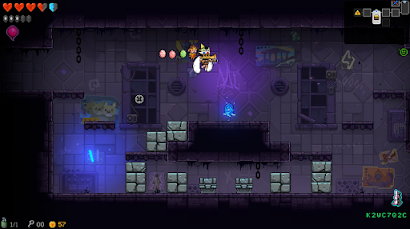 X-Men Apocalypse and Hamilton
I realize that those two movies probably don't fit together, but we watched them in the same weekend so there it is. I remember that people hated this X-Men movie, but I have enjoyed all of that franchise so I figured this one would work for me - and I was right. Is it great? No, but it was not nearly as awful as everyone made it out to be. On the flip side: Hamilton was just okay. I have friends who put this among the greatest musicals and all I can say is I'm glad they enjoyed it more than I did.
MLB news
The season is still on for now, but the Phillies bullpen is still bad and the Mets are still the Mets. It's like we're back to normal! (Also I saw last night that Christian Yelich got an inside-the-park homerun because you can apparently play the ball off the net. Backyard rules! Where's Pablo?)
NBA update
We got the thing! Thanks to Danny for coming through with a Bubble Update! Yes I know I've used that music before [sorry, Vito], but with no Super Wins to report I wanted another place to use the bed. I think it fits! (Also I knew he would not be able to get through it without a jab at the Sixers. Curses!)
XFL is back again?
The Rock is part of the group that bought the XFL, possibly signaling their return next year. I am for this. The games were decent and I like that we got more access to what's happening during the game than we ever would in the NFL. I will say I was not a big fan of the in-game sideline interviews, but the replay review system was top-notch. Know what else was top-notch? This tweet (thanks to Phil for sending it). I did try to embed the tweet, but the code got screwy. I don't know technology things. 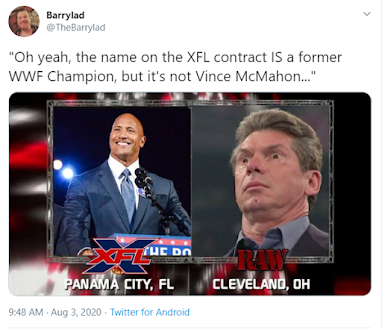 Flyers update
They won again this week and I cannot be more excited about that and about how pumped The Captain is. Hockey being back is great for so many reasons!
12 Stones
Many thanks to Paul McCoy for joining me this week! I loved this conversation, even though I was marking out the whole time. We covered more than I thought we would and I enjoyed every bit of it. If you interview people, add Paul to your list because he is tremendous. Click the picture to download Sever from Apple Music! (And that mediocre guitar playing you hear before our chat is mine - I did a thing!) 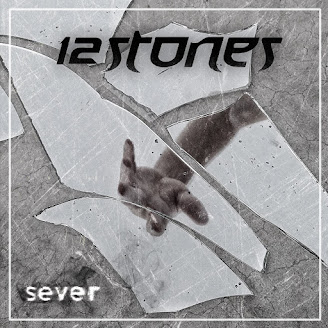 And that's that, pals! Be sure to drink your Ovaltine stick around after G. Love to hear Paul's answer to the all-important question. Other than that, stay safe and don't be a doofus. I don't know what's on tap for next week, but I hope you'll join me for the stuff! Until then, don't do anything I wouldn't do!
Crap open a cold one!
⇩
(This post was brought to you by Broad Street Bound.)
Posted by The Melting Pat at 11:50 AM