Hey, friends!
My review of Pokémon Red and Blue was super fun, and I have been asked to cover the other first generation title, so here we go with the Special Pikachu Edition! 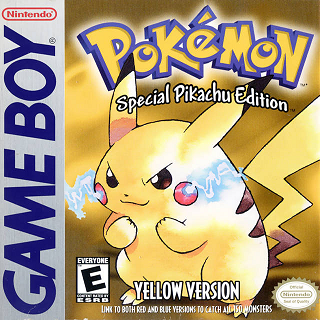 I realize that this is largely the same game as Red/Blue, but there's enough here to have some fun. The first thing you need to know is that this version came out after season one of the anime, so it is more in line with that. (I like to think people complained loud enough that Nintendo said "fine, here!" and that's why there is a third game.)
Pikachu
Aside from the world looking just a bit different (I think because this edition was on Game Boy Color as well), the first big change is your starter mon. When you try to leave town, Professor Oak stops you as he did in Red/Blue. But this time: a wild Pikachu appears! He captures it and escorts you back to his lab, where your rival is impatiently waiting. Oak offers you the Pokémon on his desk, but "Gary" bumps you out of the way to take it first. After you beat his Eevee, Pikachu pops out and appears behind you.

This is the beginning of the "happiness scale" that became a regular thing in later games. You have to keep Pikachu in your party, and not let it faint, for it to be happy. I don't think I ever let my dude stay unhappy for long, so I'm not sure if it becomes disobedient at all. That would be a neat feature though.
Kanto Starter Pokémon
I remember being upset the first time I played this because I wanted Squirtle and didn't know when or if I would be able to get it. Imagine my delight when I realized that Bulbasaur, Charmander, and Squirtle were all obtainable in the game.
There's Bulbasaur in Cerulean City, when Pikachu's happiness is high (you'll know when you talk to Pikachu and there is a heart above its head):

Charmander just outside of Cerulean City, after you defeat every trainer on Nugget Bridge:

And finally, Officer Jenny gives you Squirtle after you defeat Lt. Surge in Vermillion City:

While it wasn't exactly like the show (the Ash Grey Fire Red hack did this very well), it was so cool to be able to kind of follow along with the story that was on TV.
Team Rocket
A neat upgrade (?) in this version is the inclusion of Jesse and James of Team Rocket. You face them four times in all, and they come at you with a team of Ekans/Koffing/Meowth each time (Meowth does not evolve, but the other two do). Depending on your party at the time, they can present a different challenge - certainly more than their fellow grunts anyway. How cool would it have been to have an angle where Pikachu was kidnapped and you had to battle through a team of miscreants to get it back?
Exclusives
Much like Red and Blue, this version has exclusives. So you'll need a friend (or the Mew glitch) to really catch every mon. No Weedle, Ekans, Raichu, Meowth, Koffing, Jynx, Electabuzz, or Magmar for the Pikachu Edition.
Missing No glitch
One aspect of the game that was "fixed" for this version was the Missing No/item duplication glitch. The old man in Viridian City bounces after showing you how to catch Pokémon, so that method is out. The way I used to duplicate items - Master Ball and certain TMs - was to encounter Missing No using the Mew glitch (facing a Pokémon with a certain special stat). If there is an easier way, I never found it. But this method worked well enough for me.

I did ask how you, dear reader, felt about this version. But it seems that not as many people wanted to jump in like they did on the Red/Blue train. I have no issue with this, because it is less work for me. Our friend, Brian Amato, did mention that "no matter where you went someone was playing" when these games came out - and that is true. Like fitted hats in 2001, you couldn't go far without finding a Pokémon fan. (Is that a bad analogy? Probably. The point is that fitted hats were everywhere.)
Also before I go: I learned that the "steal trainer Pokémon" cheat works in for Yellow version when it did not work for Blue. You don't actually steal the mon though, the game just treats it as catching whatever you stole in the wild. It's pretty great.
🎮
Okay now I think I'm done. I loved this game. It gave me everything I loved about Blue with the added bonus of getting all three starters. The only real issue I had was that the trick to fight Safari Zone Pokémon anywhere did not work as well, but that didn't kill my enjoyment. Overall? I give this game a 10 out of 10: would play again. Okay you caught me - I am playing right now. But that's how good it is!
That's all for now, my friends. If you want me to review other old games (or newer games if I have played them), let me know in the comments. Back to just me on the podcast this week so come on by and hear what I totally have prepared to ramble about already. Until then, don't do anything I wouldn't do!
Crap open a cold one!
⇩
(This post was brought to you by Broad Street Bound.)
Posted by The Melting Pat at 10:26 AM