Thursday Nights on Campus - The Attic Sessions Side B

Good day, friends!
Today I have another music update for the three of you who are interested: I released another thing! 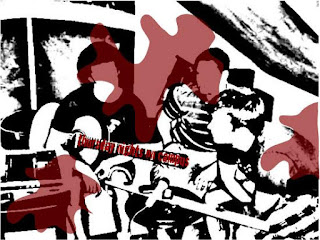 When The Attic Sessions came out in February, I did not think there would be another release. I had other songs, but I wasn't sure that I would have time to record everything before my wife gave birth. But some good fortune (and/or dumb luck) made it so I could truly finish this project. As always, huge thanks to Pat and Mark for their writing help; and to Danny Schmitz for producing. Like last time, I'll post the album here and ramble about each track.
Emo
For years I thought this song was meant to be a parody of every sad song we had. I distinctly remember Pat and I flipping through our notebook and saying "wow we write lots of sad songs. Should we lean into that for one?" And that's how this was written. About a month ago I learned that this was supposed to be a serious song - oops. I still think we nailed it!
End to Begin
I wrote this song in 2011 about being sad that I couldn't hang out with my college friends anymore because we'd all graduated [the year before] and had to do adult stuff. It helps that it fit with the original album concept so I could still include it here. Also the guitar had to be pitched down because I can't sing as high as I could a decade ago. I actually think it's better this way, which is good because that will come up again.
Thoughts of You
This is one of our "original" songs. I actually arranged a slowed-down version that was supposed to be on the first record, but I didn't write that bridge at the end until a month ago. I recorded the first guitar take with an amp that I don't have here, so I couldn't add the bridge without redoing the entire track. Instead of taking that initiative, I paid Danny to do it and he absolutely crushed it. He also used his magical powers to match my vocal take so I didn't have to redo it, and I'm so grateful for that.
Rollercoaster
Holding Up the Roof is my favorite song we have, but this is the band's favorite song. We each wrote a verse - Mark wrote his in under a minute, it was insane - and really worked on the harmonies together. I think it is our most "complete" song as a band. That made it a bit weird to have to pitch the guitar down a step (again, I can't sing so high anymore) and sing it very differently than we had for years. But it also gave me the chance to recruit an actual singer for part of this. I did not think Arden Kurhayez [Double Identity] would say yes when I asked her to record some vocals. But she surprised me on that front and absolutely crushed it with her performance. Thank you so much, my friend! Life is a ride, indeed.
🎸
And that's that, my friends. A project that started when I was 19 has finally been completed a few weeks before I turn 33. It almost doesn't feel real. These songs have been "in the works" for so long, it's wacky that you can actually hear them. Again I want to thank Pat and Mark for helping me put this together, Danny for making it sound like I didn't make these songs in my basement, and Arden for improving our track with her actual singing. And of course: thanks to you, my friends for listening and joining me on this journey. It means the world to me.
This week's podcast is a retail story, so I hope you come back and have fun with that. Until then, don't do anything I wouldn't do!
Crap open a cold one!

⇩
(This post was brought to you by Broad Street Bound.)
Posted by The Melting Pat at 7:58 AM