Good day, my friends!
Earlier this year I got RBI Baseball 21 and I want to ramble about it. Come along, won't you? (Unless this isn't your thing. And if that's the case, you probably didn't click on this one.) 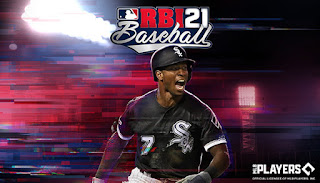 I had not played an RBI Baseball game in several years, but I jumped on this after learning that The Show would not be on PC (at least not yet). So far I am not disappointed. Is it perfect? Of course not. But I grew up playing arcade baseball games - MLBPA Baseball on SEGA was my jam - so none of the flaws are shocking.
⚾
I do not like the soundtrack in this game. It wouldn't be so bad if they took out the clips between half-innings and just kept the organ music/ambient crowd noise you get when the music volume is 0. But it just feels very out of place to me. And the songs don't really fit with the game, so I am glad that there is an option to mute it.
Speaking of muting, the play-by-play commentary is not good and I am happy there is an option to mute that as well. It sounds like everything was recorded separately (player names in particular) which is fine. What is not fine is that I can easily tell that this was the case. I would much rather have the MLBPA or Bases Loaded comments of "strike," "ball," "foul," "out," and "home run" - with older style music and ambient crowd noise - during games.
There is no online play on the PC version. This is baffling. I can understand if that mode is not advertised because there are fewer players than on consoles. But to not even include it when your machine has to be online to download updates just seems off - and I have zero interest in playing online.
With a recent update, you can no longer edit players in Franchise Mode. This is a bummer, because I like to make my players as tall as possible (it looks funny to me). I guess after this season is over, I will dominate the next nine years of the mode with created behemoths. Let me know if you want to be added to the squad!
Also an issue I ran into recently: trying to hit this curveball from Yu Darvish. Luckily no one else has this superpower so I just have to hope I don't face Yu in an elimination game!

I have seen a lot of complaints about the game crashing (has only happened twice for me) and that the fielding is not realistic. Look pals, it's an arcade game. The graphics are meant to be simple. And even with the...limitations let's call them, the players and stadiums look great. As for the animation? Again: it's an arcade game. If you've played on in the last three decades, you know the cuts won't always be smooth. Like I said I grew up on games like these, so this is not really an issue for me. I expect defenders to make most plays, even if it doesn't look like they will get to the ball.
I love the ambient crowd noise and ballpark organ music in this game. Again, I wish there was some old school arcade-style music instead of weird snippets of actual songs here. But the little organ riffs on strikeouts make me chuckle.
I have spent most of my playing time in this game on the franchise mode. I created myself to play CF and added some key pieces to the Phillies. We are currently undefeated. Did I take advantage of the option to force trades? Of course I did. It's a video game, so I want the best players. Honestly though I kept most of the roster the same. I use the old controls so really hitting is based on timing. Once you nail that in one of these old games, it can be pretty easy to rack up hits. I can't speak to the modern controls, but I'll make an update if I decide to go that route.
I haven't played an MLB game since before the Home Run Derby switched to a timed format, so having that here is nice. It is a bit bland, mainly because the camera angle is really wide and kind of takes me out of it. But if you just want to hit dingers for a few rounds, you for sure can. I like that there are legends available to choose as well - Vladimir Guerrero has won several of these.
🎹
To put it simply: this is a fun arcade baseball game. It's not perfect. But I, as a PC player, get to play an official MLB game with current rosters. If you go in expecting a game like The Show, you're going to be disappointed. If you're looking for a fun baseball game that harkens back to your childhood, I think you'll like this one. I would say we could play online together, but that's not an option for those of us not on a console. If you do play online some way, I hope you win!
So there you have it. I bought this game on a whim and I am having a lot of fun with it. Let me know if you do too, or if you'd like me to dive into a different game. I can make no promises, but I'll do my best. Until next time, don't do anything I wouldn't do!
Crap open a cold one!

⇩
(This post was brought to you by Broad Street Bound.)
Posted by The Melting Pat at 3:37 PM