Show notes - Episode 382: Trade Me to the Fun Place

Morning, friends!
I think I finally figured out how to get my recording software to work with my new interface, which means the show will sound better (I hope) going forward. Does that matter more to me or to you? I have no idea, but let's do the stuff! 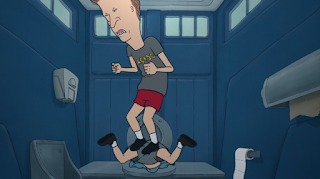 To download the episode, click here!
To watch the Patreon version with a bonus segment, click here!
I posted a preview of the Patreon bonus on YouTube which you can watch below. I don't know if I will have time to do this every week, but we tried it once!
standards
Thanks to our pals for the tune! Pre-order Fruit Town here and watch the Smile music video below!
Just be funny
Beavis and Butt-Head Do the Universe is hilarious and if they're your thing, I suggest you watch it. We both laughed loudly often. Also: Not everything in rasslin has to be serious. I was worried how this transition would go and I think it's fine? Just having funhausen over here.
Watching new things
I figured I'd eventually get back into basketball, but I didn't envision the kiddo would be calmed by racing. But if he's not yelling, I'm happy. Plus sabes que everyone loves George Lopez!
Kevin Durant
An hour after I finished recording, I read a piece about how the Kevin Durant trade market is not as flush as the Nets hoped. I still think it will take a lot to land him, but might the Nets have to settle here? (I'm legitimately asking, as I do not really understand how NBA trades work.)
More from the NL East
I know the Mets are going to be good. I can see the Braves getting it together. I know I didn't mention the Marlins but their pitching has been good. But your Phillies are still in the thing!
📱
And that's that, pals! Thanks for joining me this week. Next time we may have a guest, but if not I will come up with some stuff to ramble about for you. Also we have a new thing: you can leave me voice messages below with comments on this episode or anything else via SpeakPipe. Do it up and until next time, don't do anything I wouldn't do!
Crap open a cold one!