That Time I Forgot to Do Show Notes

I forgot to do the thing last week, so I'm dropping in to give a quick update before the show this weekend.

If you have the chance to see Iliza Shlesinger (I realize I botched her name on the show) and/or James Goff do stand up live, go do it! They are wonderful and you will laugh lots of times! Also, I have just started Iliza's book, Girl Logic, and it is great so far. Get it wherever you get books!

In a quick Trump Twitter update, he has still not answered if he thinks a hot dog is a sandwich. And friends I have to say, it is really frustrating given the nonsense he engages in on there daily. When I started, the goal was to get blocked. Now? I legitimately want to know his take on the issue. Not that I'm looking for positives, but it would be a real feather in his cap if he responds to a relative nobody like me. (Okay. really I just want to bash him directly after he inevitably answers incorrectly - the man eats ketchup on well-done steak, after all.)

"So what have you been watching on TV lately, Pat?" Well friend, I'm so glad you asked. In terms of current shows, I have been all in on The Gifted, Gotham, and The Goldbergs. I am a bit bummed that I haven't kept up with Speechless or black-ish this year, but they're both on Hulu so I can get myself caught up sans commercials. Also I'm excited that season five of Agents of S.H.I.E.L.D. begins this Friday (even if Inhumans wasn't that good)!

As far as "older" shows, I am into season two of Boy Meets World and season three of It's Always Sunny in Philadelphia and I'm enjoying every bit of each. Have I seen all of one and most of the other? Absolutely, but this is America! Woooo! 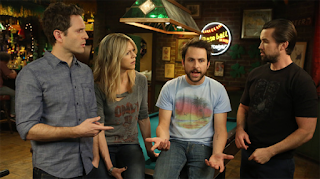 And, before I ramble on upcoming show stuff, I realized today that I have a more...coherent way to open my next stand up set. It came to me on the bus today and I figured someone would want to know that my brain waves were still jumping around the creative bubble (or something like that). Let me know if I should branch out and find an open mic with strangers to try this set!

Okay to wrap this up, we have a tune lined up for [possibly] the next three shows. And we might have an interview mixed in there too - the thought of it terrifies me. Topic-wise, I may do some yelling about mansplaining and stupid market shoppers, ramble on hanging out with coworkers, and have a guest to debate pancakes vs waffles. It will all be super fun I hope! Yeah!

Thanks for sticking with me in my mini-layoff, youse guyses. We're back on Saturday with a show full of stuff! Do the thing!